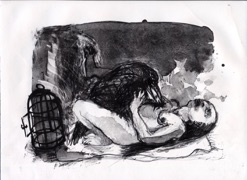 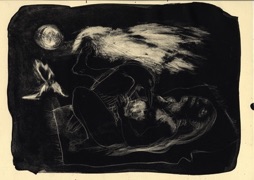 A single run lithograph drawn with

crayon and printed in black from stone

Exists only as a series of trial proofs

A single run lithograph drawn with crayon and

where the drawing is conceived in negative as

white against black - printed from stone 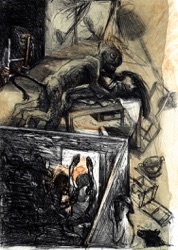 and tusche - printed from stone and

Part of the image for the final edition was

deleted and the edition was printed as a

In October 2008 Marcelle Hanselaar visited Aberystwyth School of Art for the opening of her exhibition of drawings, etchings and paintings -  Down The Rabbit Hole. An experienced etcher, Marcelle was keen to try some lithography, so while she was in town  she drew up three stones. Each stone was purposefully planned to try out a different technique:

Untitled was drawn with crayon and tusche - and wasn't editioned

Les Aimants was drawn as maniere noire - where the image is seen scraped white against a black background.

In June 2010 Marcelle returned to the School of Art - working with Andrew Baldwin’s new processes of etching and sugar aquatint. In the lithography studio Marcelle worked on  several aluminium plates - drawing on to these with crayon and tusche. On two plates - the drawings were washed off with water and redrawn - thus causing a degree of underprinted tone. None of the aluminium plates were actually editioned.

Whilst the image 'Droit du Seigneur' was proofed in colour - printed from stone and two aluminium plates - the final image was substantially altered - deleted and then printed as a single run image in black.