Proof from the stone drawn using crayon and tusche

Three-run lithograph printed from stone and plate drawn with 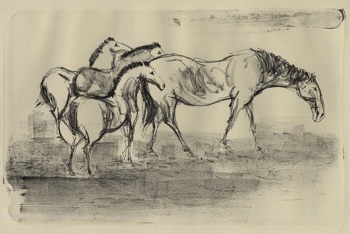 A single-run lithograph printed from stone drawn with crayon

Professor Jin Baoping visited Aberystwyth in July 2013, on his way to The IMPACT 8 Conference in Dundee. Originally from Xian, I first met Jin Baoping in 1991 - 1993, when he came to Belfast as a student to work with David Barker.

Since then he has become an illustrious and respected professor - well known in China for his expertise as a lithographer. He has exhibited widely in China and internationally in the UK and USA. He is now head of Printmaking at Shenzhen Art Academy.

Whilst he was in Aberystwyth, he spent a week drawing the local landscape and then drew up two stones. One of these - 'The Grand Day Out' was developed as a three-run print and incorporated a further two plates drawn using crayon and tusche.

Both prints were produced as small editions. One copy of each was donated to the Aberystwyth University Collection of Drawings and Prints